Calling on all Volunteers for a Julian Town Square!

I first met Dana Pettersen back in the fall of 2018 at Julian High school, while she was volunteering at the Booster club. She was eager to tell me more about the program and some of the other volunteer initiatives she was involved in. Shantel and I had recently moved to Julian and were still getting oriented to life on the mountain in our beautiful little town. It was a very exciting time of discovery for us both and we were so captivated with all the local talent, entrepreneurial spirit and especially the volunteer attitude that permeated much of the town culture.

Dana and I clicked right away. We both shared a passion for community activism, volunteering and making our community better. It was a topic we could talk about for hours. Dana would tell me her stories, experiences and challenges while she served on the many volunteer groups that make up the town. She told me stories about her time as a merchant and serving on the chamber board. I learned so much about the town politics, history and complex dynamics listening to her stories and struggles. I always admired how she was always able to navigate those challenges and obstacles with tact and grace. One of the stories she talked to me about often was Jess Martin Park and what it took to bring that project about. She talked to me about so many of the changes she’d witnessed over 2 decades, the devastation of the Cedar fire, the challenges with tourism growth and her concerns about keeping the volunteer culture alive in our little community.

5 years later and we’re still talking about the same topics and working together for a better Julian. 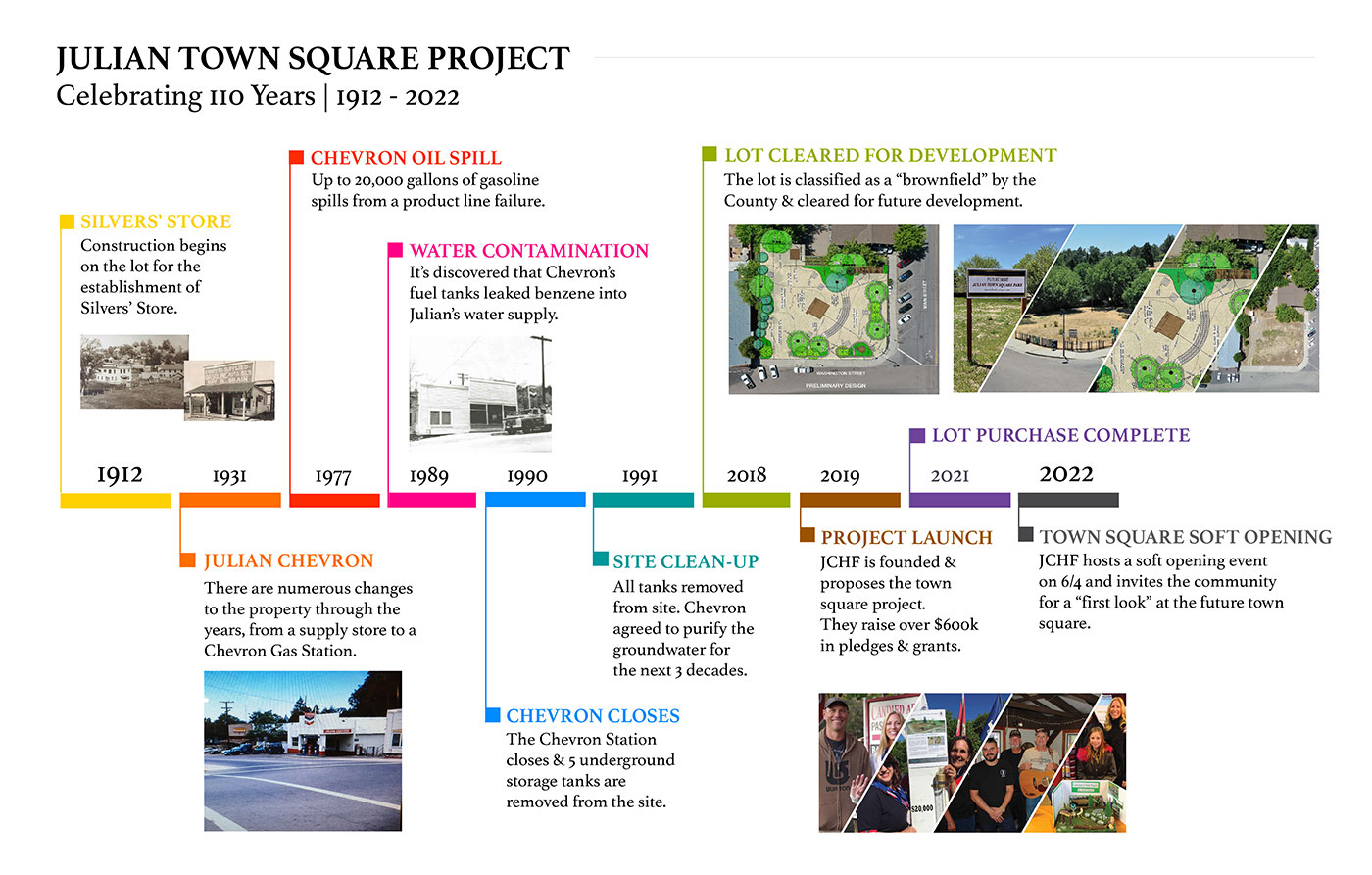 It was shortly after our first meeting that Dana first talked to me about the Julian Town Square project. Even then I thought it was a brilliant idea that was so appropriate for that empty lot. I was eager to support the effort in any way that I could and things slowly evolved from there.

I went on to meet Teak Nichols and Jean Duffy over a series of meetings, which are two of the people besides Dana that have contributed most to the town square project. Teak was the initial visionary who first conceptualized the project. His original renditions helped JCHF get launched and he was our main project spokesman. Teak was familiar with a lot of the history behind the lot, the different lot owners and the many changes over the decades, the Chevron spill and a lot of other information, which helped us tell the story. He was a very eloquent and knowledgeable spokesman and also helped us navigate through the ARB, planning meetings and various other community groups. Teak was such an integral part of the effort and dedicated countless volunteer hours in support of the town square. Jean Duffy has been the cornerstone of the town square project since day 1. She has been the nuts and bolts of the operation with her many years of experience as a community advocate, campaign organizer and in public health works. The idea behind the town square was born out of a resident leadership academy she spearheaded, which was identifying community improvement project that were long overdue.

It was Jean who handled all of our finances, legal and non-profit requirements. It was Jean who went on to secure the initial seed money from Chevron, which set the entire project into motion. It was Jean, with the help of Donn Bree, who handled the lot purchase and the difficult negotiations with the seller. Her network, knowledge and expertise in non-profit governance was the most integral part of making it all happen. Jean also played a major role in helping us find the necessary grants and guiding us through the applications process. She has led the Town Square Project from behind the scenes since 2017 and this community is forever indebted to her for this volunteer effort.

Together with Dana, no other persons have done more for the Town Square project than this power duo.

Dana was a founding member, the project fundraiser, community organizer and key project liaison. I worked with her the closest and got to know her very well during my many volunteer hours alongside her. One of the things I admire most about Dana is her ability to bring people together. She has the most leadership skills of anybody I know in the backcountry. I admired how she approaches everything with grace and style. She has such a loving and forgiving soul with her matriarchal ways. Through attacks and attempts by individuals/organizations to derail the town square project, I never saw her hold a grudge against anyone. Her conviction and dedication during some of our most heated and challenging moments continue to inspire me to this day.

It was Dana who oversaw much of the grass-roots outreach, brought the community together and put the right people in play. Only Dana could’ve navigated some of the very difficult, divisive and major roadblocks we faced along the way. Dana epitomizes what it is to be a community volunteer. We’re so fortunate for leaders like her that continue to keep the spirit of volunteerism alive in Julian.

I’ve learned so much from her during my time as a volunteer with the Julian Community Heritage Foundation. I often think about our challenges, successes and struggles over the past 5 years bringing this very difficult dream, vision and mission to reality. There’s a certain fulfillment and deep soul satisfaction that only volunteer work can invoke. That’s one of the most important lessons I’ve learned since I moved to Julian. I encourage you all to get out there and do what you can to keep the spirit of volunteerism alive, like so many Julianites before us. It’s a long Julian tradition that we hope to keep alive for many generation to come.

The Julian Community Heritage Foundation (JCHF) is a non-profit organization, dedicated to preserving the history of the community of Julian and to promote the quality of life of persons of all ages living, working, and visiting this destination.